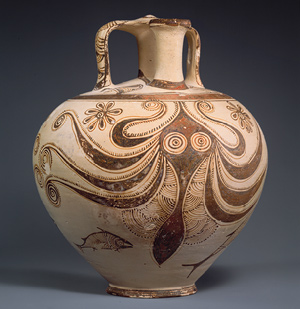 This is going to be a series in which, basically, I post (hopefully) entertaining stories/quotes about any theme I happen to feel like at the time.  If you’ve got a favourite funny story/quote – or have just always wanted to know what the Greeks and Romans said about, say, volcanoes, or mushrooms, or anything, really – feel free to suggest it for future posts! In the meantime – octopuses:*

The Mycenaeans seem to have been rather fond of octopuses, judging by the number of jars they painted them on – for example this stirrup jar in the Met

In fact, they liked them so much they even decorated furniture with them: one Linear B tablet lists

Move on a few hundred years, though, and for some reason Homer doesn’t talk about octopuses much; he’s a bit busy going on about stuff like heroism and tragic deaths. Clearly the Mycenaeans had a better sense of priorities. He does manage to get an octopus into a simile in the Odyssey, though, when Odysseus has been shipwrecked and is swimming for shore; he grabs a rock, but the waves tear him away:

Just as when an octopus is dragged from its lair, and pebbles cling to its suckers, so pieces of skin were torn from his strong hands on the rocks

The best thing about this simile is that it’s not Odysseus who’s clinging on like an octopus; it’s the bits of skin that are left sticking to the rocks like octopus-suckers. Which is a bizarre/grotesque enough image to make this one of my favourite Homeric similes ever.

The ‘Weird and Wonderful’ prize, however, has to go to Pliny the Elder, who tells the story of an octopus which used to climb out of the sea and into the fish-pickling tubs on the shore, and eat all the fish. To stop it, the fish-picklers built a fence around the tubs – which the octopus promptly climbed over with the aid of a handy tree. Eventually they set a pack of dogs on it, but the fight was pretty much going the octopus’ way until the watchmen finally finished it off with their spears. According to Pliny, it weighed 700 pounds, and its tentacles were 30 feet in length.

I’m not entirely sure why a 700-pound, 30-foot long octopus needed a tree to get past a fence, but perhaps it felt a more inventive method than simply squashing the fence was needed to ensure its place in the (natural) history books. Another possibility is that this is the first recorded sighting of a Pacific Northwest Tree Octopus, in which case this might provide evidence of a Mediterranean origin for this (unfortunately poorly-understood) species.

* The Greek and Latin words πολύπους and polypus can actually refer to squid and cuttlefish as well. I’m sticking with ‘octopus’ since it’s more convenient than ‘unspecified marine animal with tentacles’.

** You get this kind of thing a lot reading Linear B. At least it gives us Mycenologists plenty to argue about.

11 thoughts on “Weird and Wonderful Classics: The Octopus”